Hertz? It sure does. 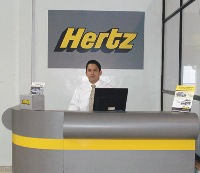 We’ve got some old family friends staying wit us at the moment. As many do, they flew Ryanair to La Rochelle and hired a car from Hertz, Ryanair’s preferred car hire partner.

Anyone who’s hired a car will know that every opportunity is taken to squeeze a few extra quid from the punter…reduce the excess by buying more insurance, additional drivers, kids’ seats…and of course we all know the No 1 Golden Rule: Never Return a Hire Car Without a Full Tank of Fuel. Find the petrol station closest to the airport, fill the car to brimming and crawl back to the drop-off point, or find yourself stung for topping it up at criminal prices.

Not so any more, it seems. At least, not at Hertz (I haven’t checked out the other major car hire companies). Be warned this summer because there’s a new scam in town, and you might not notice it in the small print.

When our friends picked up their car, they were told that they’d been charged for the full tank of fuel. Charged a decent amount too: 110 euros for a tank that holds 55 litres (that I did check…Toyota Corolla Verso D-4D if you’re interested). So that’s 2 euros a litre, roughly double the current average around these parts. Not only that, they also had to pay a service charge for the privilege of someone filling the tank…

But that’s not the best bit. You might assume that should the car be returned with a similarly full tank (like in the old days), the 110 euros would be credited back. Not so. Hertz wants you to return the car with an empty tank, because you get nothing back for fuel you haven’t used.

I’ll repeat that. Hertz wants you to return the car with absolutely no fuel left in the tank.

Now, how realistic is that? I mean, it’s not uncommon that visitors don’t use a full tank of fuel during a stay with us, so what are they supposed to do? Syphon the fuel out in the airport car park? And even if you did use the full tank, how easy is it going to be to coast into the drop-off area on the last fumes? Realistically there’ll always be some fuel left in the tank…which is pure profit for Hertz. It’s outrageous.

This little scheme is called the Mandatory Fuel Purchase Charge and you can read it here.